The top two photos are a stereo pair (reversed for cross-eyed stereo viewing) taken in 1993 by Michael Naimark in Canada's Banff National forest. Below is a depth map computed using a stereo correspondence algorithm designed by John Woodfill and Ramin Zabih; intensity indicates depth, with brighter pixeles being closer. Pixels the algorithm did not reliably match are indicated in blue. Below are two virtual views generated by casting each pixel out into space based on its depth, and reprojecting it into a virtual camera. On the left is the result of virtually moving one meter forward, on the right is the result of virtually moving one meter backward. Note the dark de-occluded areas produced by these virtual camera moves; these areas were not seen in the original stereo pair. In the animations below, such regions were filled in from neighboring stereo pairs. 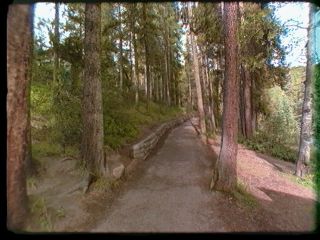 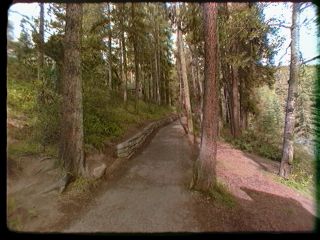 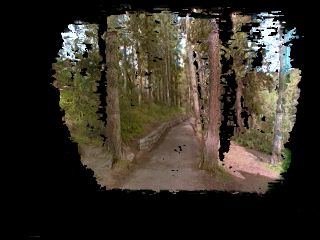 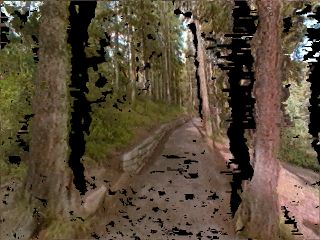 2) Image-based modeling and rendering (IBMR) methods rely on a set of two-dimensional images of a scene to generate a three-dimensional model and then render some novel views of this scene.

The traditional approach of computer graphics has been used to create a geometric model in 3D and try to reproject it onto a two-dimensional image. Computer vision, conversely, is mostly focused on detecting, grouping, and extracting features (edges, faces, etc.) present in a given picture and then trying to interpret them as three-dimensional clues. Image-based modeling and rendering allows the use of multiple two-dimensional images in order to generate directly novel two-dimensional images, skipping the manual modeling stage.

3) Michael Naimark presented the Immersion '94 project at SIGGRAPH 95 at the panel session "Museums without Walls: New Media for New Museums".